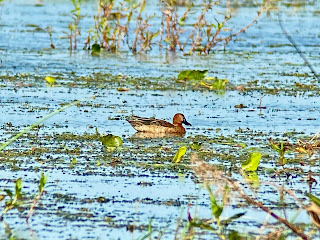 People often wonder how I keep seeing so many species on my trips to Broadmoor.  There is a method to the madness.  My goal when birding Broadmoor, and pretty much any other time I am in the field, is to collect good eBird data.  To that end, I tend to run basically the same route each time.  However, I can’t help but try at various points to try at various points to add more species.  So without further ado, here is how I make the magic. 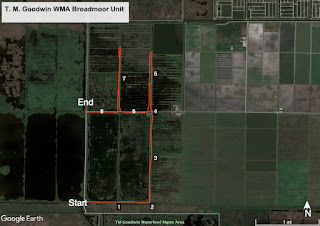 Start – I often log 20 or more species before I even start traveling.  The levee at the southwest side of the reservoir offters a broad view of Broadmoor and the adjacent St. Johns River Water Management District Upper Basin Project (T. M. Goodwin is also part of that project.)  Running to the east is a hedgerow of trees and brush along the border between Broodmoor and the Original Unit of T. M. Goodwin.  Having all these habitats together makes it a great start and potentially a great Big Sit.  During the summer and fall, Gallinule numbers get a quick spike, often topping 250 individuals.  In winter, coots and Ring-necked Ducks will outnumber them.

1-    Traveling east along the low levee, I listen for songbirds and stop at various points to pick up birds I could not see from the high levee.  Listening for cardinals chipping or the “spee” of gnatcatchers to indicate songbird flocks.  Northern Waterthrush and Ovenbirds are usually here from fall to spring.  This is pretty much the only area where I pick up Carolina Wrens and cardinals and often many other songbirds.  These species are critical for getting a high species count.

2-    The southeast corner of the reservoir is the last spot to pick up some of the critical songbirds, the first chance to evaluate the cells, on the east side, and the first good chance to scan the powerlines to the east and looking for birds like Sandhill Cranes flying over the farm fields.  Red-tailed Hawk is often seen on the power poles in winter.  I can pick up kestrels, mockingbirds, shrikes and others from the power lines.

3-    Slowly driving north, I check for vistas into the reservoir on the left and the cells on the right.  Managers cycle the cells through wet and dry, vegetated and clear, in order to maintain the health and diversity of these wetland systems.  Consequently, the habitats and birds vary throughout the area, outside the reservoir.  There will usually be a variety of habitats at least somewhere, though.

4-    From the northeast corner you can check the farm buildings to the east for such things as Eurasian Collared-Dove, caracara, mockingbirds, shrikes, etc.  Sometimes cranes can be seen flying over the fields.  In late summer, there are often Swallow-tailed Kites looking for grasshoppers and dragonflies.  There used to be more vegetation where I would sometimes see Painted Buntings and sparrows here.  For some reason, Fish Crows are most often seen around this spot.

5-    The first levee north of the reservoir is often quite productive.  Terns and skimmers are usually found in this area.  Shorebirds may also be here.  If water conditions are right in winter, there may be as many as 2000 Long-billed Dowitchers.   Among them I will scan to find yellowlegs, Stilt Sandpipers, Least Sandpipers, plovers, and even sometimes Dunlin.  Driving is permitted for a half mile.  Sometimes I may walk up the levee beyond that.

6-    Moving across to the next levee, I will often see much of the same birds.  Numbers of many species will exceed the eBird filters by now if they haven’t already.  This site is way out of the norm for Brevard when it comes to numbers.  By now, I will sometimes have 30-50 swamphens depending on habitat conditions and whether the birds decide they want to be detected.  The filter is currently and appropriately set at five.

7-    Looking left as you drive up the next levee you will see some of the best diversity in plants on the WMA.  There is a noticeable yellow theme here as Lotus blooms in the summer, the yellow “Mexican” Lilly, a smaller native lilly is prevalent.  Native Canna (yellow) can also be seen here.  If numbers of swamphens are lacking, this is usually where they catch up.  Same goes for Ring-necked Ducks in the winter.  Often this is where summering (nobreeding) American Coots as well as oversummering ducks that were perhaps wounded in hunting season are seen.  From the northern driving point, I scan the tree line for eagles, hawks, and whatever else might be hanging out.

8-    On the last stretch of levee, I mostly add numbers of things like swamphens, Purple Gallinules, and more ducks.  New species are hard to come by at this point.

End – I’m usually ready to pack it in by this point.  I will stop atop the levee to scan this section of the reservoir.  Sometimes a few songbirds will be in the willows to the west.  Purple Gallinules are often in great numbers in the upper basin area to the northwest.

So that is how I do it.  The route runs about 7 miles with 1.5 miles of overlap, thus I adjust the distance on my eBird lists to 5.5 miles.  It may take up to 4-5 hours in winter.  Summer and fall will be closer to 2-3 hours.  Species totals rarely exceed 50 in summer.  Fall numbers are usually around 60.  In winter, less than 70 would be quite dismal.  75 is about the usual winter number.  Highest total so far is 90 species, in late October.  Theoretically 100 is possible but that would require getting just about everything that was possible when every type of water level and habitat was available, plus a few rarities to get over the top. 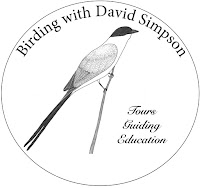 Posted by David Simpson at 5:33 AM No comments: